Bandanas are a bold statement piece. But who invented these colorful handkerchiefs and why? The bandana, as it’s generally known today, is linked back to the late 17th Century in the Middle East and Southern Asia. In fact, the word “bandana” is actually believed to come from either Hindi or Urdu. Either way, the word “bāṅdhnū” roughly translates as a tied or bound cloth. It was in those areas that the black printing processes emerged. The method comprised of pressing pre-carved blocks into tiny pieces of woven fabrics, after dying them with indigenous plants and materials.

A short time later, these square pieces of printed fabric started making their way over to Europe. In the early 18th Century, they were marketed mostly as women’s shawls, and one of the first patterns to gain popularity was the ancient Persian “boteh” pattern. The repeating arrangement of curved teardrop-shaped figures eventually became known among European consumers as “Paisley.” 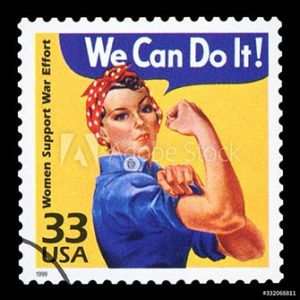 Then, in 1921, more than 10,000 mine workers in West Virginia came together and wore red bandanas to demand unions and better working conditions. The event, at the time the largest armed uprising of citizens since the Civil War, became known as the West Virginia Coal Miners March. This revolution is thought to have contributed to the coining of the term “redneck.” The red bandana was also wildly popularized by the artwork featuring Rosie the Riveter. And lezbehonest – Rosie has been a lesbian icon plastered across LGBT+ walls for decades.

The fact is, bandanas have served an essential function for generations, worn by sailors, farmers, cowboys, bikers, miners, and construction workers. More recently, the use of bandanas has extended to the LGBT+ community, gangs, and general hip-hop culture. The two-tone paisley-printed cotton cloth has undoubtedly come a long way from its early roots. Nowadays, it aids in the promotion of popular culture and other twentieth-century forms of advertising. Walking through a Pride festival, you could easily pick up a dozen rainbow-branded bandana designs from local businesses. Local artists, including me, are even hopping aboard the bandana train, and why not? They are fashionable, fun, and can be worn a shit-ton of different ways. Whether you want to tie it around your neck, on your wrist, or wear it in the back pocket of your jeans, bandanas rock. My design is hands down the coolest bandana I’ve ever seen — it is black and white, featuring subtly placed genitalia. Okay, I digress; the design is not so subtle. It is a bandana filled with dicks . . . You heard me right. Dicks and sperm in a variety of shapes and sizes cover the black cotton piece. It may not be the traditional paisley pattern most people are used to, but it definitely stands out more. If your wardrobe is lacking that one accessory you just couldn’t put your finger on, look no further. You can order it here and thank me later.