Anyone who grew up during the ’80s was surrounded by a few common denominators: Cabbage Patch Kids, fanny packs, mullets, and slap bracelets. But another incredibly repulsive, yet nostalgic finding from the ’80s, was Garbage Pail Kids. Personally, when I first learned about this ironic spoof on Cabbage Patch dolls, I cried from fear. I was only 4 or 5 years of age at the time, and the grotesque images really got to me. Soon the fear became invigorating and I fell in love.

I wasn’t the only one who loved the gruesome cards. More than 800 million of the mucus-covered Garbage Pail Kids have been purchased over the years. Parents ended up mortified, and psychologists wondered if a preoccupation with the grotesque images could affect a child’s development. In hindsight, I guess that was a valid concern when I think about some of my friends who grew up during that era. But I digress; the cards certainly pushed the envelope between cute and creepy. It’s a combination I grew to emulate in my work as an artist and love to use as inspiration to this day.

Those of us who lived during the epic times of Garbage Pail Kids may even remember schools banning the cards from campus. They were too much of a distraction for kids, and teachers couldn’t stop students from trading their new ‘treasures’ during classroom instruction. Garbage Pail Kids were initially made to be included in Wacky Packs in 1985. Topps Company, known for their baseball cards, actually made more money selling the satirical Wacky Packs during the 1970s than traditional baseball cards, according to top traders. Garbage Pail Kids are making a popular comeback these days, as people are getting their favorite cards inked onto their bodies as tattoos. Retro t-shirts, lunch boxes, stickers, and other memorabilia are still wildly popular after all these years. 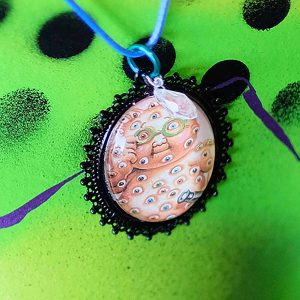 There were 660 different card designs in the Garbage Pail Kids series, and each illustrated babies covered in ooze, vomit, blood, or pus. Fan favorites included “Barfin’ Barbara,” “Leaky Lindsay,” and “Unzipped Zack.” Some of these cards are now crazy valuable, raking into the thousands, selling on eBay, and at conventions. However, three cards are worth as much as $7,500! The most valuable one is known as “Nasty Nick” – it’s the very first card in the series, featuring a 1a. The artwork features Nick, dressed as a vampire, ready to bite the neck of a female doll that resembles a Barbie. Personally, it’s one of my favorites for a multitude of reasons. The next card on the list is “Adam Bomb,” and it’s worth $4,000 in mint condition. The reason for its popularity is because Adam’s head exploding into a mushroom cloud is the image used on the cover of original boxes and packs for the first five series. Ironically, the image of “Nasty Nick” is the same graphic used on the third most valuable card, “Evil Eddie.” In the early days of the series, there are 41 “a” and “b” cards, for a total of 82 cards. The only difference between the “a” and “b” cards is the name of the character. The “Evil Eddie” card in mint condition is worth $2,500. On that note, it might be worth a trip to your garage or storage shed to see if you have any old Garbage Pail Kids that could be worth a small fortune.

The impeccable combination of clever puns and bodily fluids on the cards wasn’t for everyone. But it opened my eyes to a world that was okay with truly demented, off-colored artwork. Life isn’t always pretty, and the Garbage Pail Kids embraced the different, the ugly, and the outcasts. If you’d like to relive your childhood by rocking a Garbage Pail Kids necklace today, visit my shop: https://carebeartattoos.com/product-category/necklaces/