Whether you’re trying to make a political statement or just rocking your favorite band on a retro jean jacket, pin buttons are an easy way to express yourself. But where the fuck did they come from? That’s a good question — and I bet you wouldn’t believe me if I told you that pinback buttons have been around for hundreds of years!

The concept of a pin button was patented in 1896 by The Whitehead and Hoag Company. They were the leading American manufacturer of advertising novelties at that time. Whitehead previously had patents for various designs of ornamental badges and medallions, patented as early as 1892. But then another patent was issued to Whitehead & Hoag on July 21, 1896, for a “Badge Pin or Button.” The design used a metal pin anchored to the back of the button to fasten the badge. This is very similar to the buttons we wear to this day.

The popularity of this newfound advertising method soared all over the country. The buttons had to be made by hand, so millions at a time were put together by local factory workers. And even in the 1800s and early 1900s money and greed were ever-present. Whitehead and Hoag, not willing to lose a single button order, maintained a strictly non-partisan stance. They set it up so small groups such as the Socialists, Communists and Prohibitionists could place their button orders just as easily as the Democrats or Republicans.

Politics, of course, were a huge reason for mass button orders, especially during presidential elections. They were an easy and affordable way to spread the word about a favorite candidate (or crush whomever he was running against.) Aside from politics, cartoon characters and artists made up another significant portion of button demands. As far back as 1898 early buttons were printed with a popular cartoon character, The Yellow Kid. The novelties were offered as prizes with chewing gum or tobacco products to increase sales. Cha-ching. Later, open back buttons were introduced, which allowed any type of advertising or message to be inserted into the slot. The idea was pretty badass and made for walking billboards all over town.

Branding with the Pin Button

In 1945 the Kellogg brand jumped on the button bandwagon. They started inserted prizes in the form of pin-back buttons into each box of Pep Cereal. Pep pins have included U.S. Army squadrons, along with characters from newspaper comics. There were five series of comic characters and 18 different buttons per set. And guess what? People are selling the complete collection of Pep pins online for hundreds of dollars today on eBay. Some of the more popular pins have images of Superman and Popeye emblazed on them. Honestly, they’re pretty cool. Check them out here if you feel so inclined. 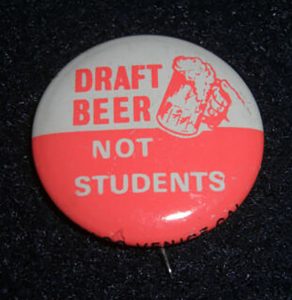 In the 1950s and 1960s, the pins displayed images of Elvis Presley, the Beatles, and the infamous sex symbol Marilyn Monroe. They became more of a popularity piece and conversation starter than anything else. Then, of course with the Vietnam War in full swing, protest buttons were all the rage. Buttons have always been a way to share personal angst, diverse viewpoints and to otherwise stick it to the Man. My personal favorite from that era: “Draft Beer – Not Students.”

Today, local artists can create their own pins based on their favorite pieces of work. Businesses share cheesy customized buttons with employees as ‘gifts’ and parents proudly plaster their kids’ baseball picture-button on their blazers each spring. Whatever the reason may be pinback buttons have been around for hundreds of years and aren’t going away any time soon. If you feel the need to tell someone to “Eat a Dick”, or want to give a “Cunt” button to your boss on your last day of work click here- I’ve got you covered: https://carebeartattoos.com/product-category/pinback-buttons/.