Lowbrow art, also known as pop surrealism, is a visual art movement that began in the LA area in the late 1970s. Its cultural roots were motivated by underground comics, punk music, street art, skateboarding, and hot-rod cultures of the street. The phrase lowbrow and pop surrealism can be used interchangeably. But no matter what you call it, the style is often humorous, sarcastic, a little twisted and ironic.

Most pop-surrealism artwork is expressed in paintings, toys, digital art, sculptures, collages, and of course, tattoos. The genre exudes technical strength while remaining rebellious and unapologetically dark. It is morose and distinctive, typically character-driven and narrative-based. Pop Surrealism is characterized by its unique stylistic traits, which include doe eyes, large heads, and dream-like cartoon-influenced landscapes. 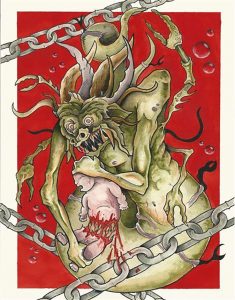 Lowbrow, or pop surrealism, started as a product of political and social times, a revolution against the academic conceptualism of the ’60s. However, it has continued to morph and thrive into the 21st century. The unique style remains an unpretentious blend of possibilities, open to flux, and devoted to beautifully polished works. Pop surrealism seizes our imaginations and kicks off a journey into a wide-eyed, candy-colored, beautifully disturbing world of artful madness.

Growing up in Southern California, I was drawn to the irresistible nightmares and enchanted dreams of pop surrealism. I found myself completely enthralled by images of delicately ghoulish little girls, wicked bunnies and other wonderfully peculiar fairy-tale images. My love for art began with an unassuming drive for self-expression as a child. I was a tormented soul stuck in all-American town, spewing my most extreme emotions into visual art and music. Everything I created was a “screw you” to authority figures, media hype, and social norms. This mentality understandably caused some problems during my teenage years, but it also provided me with the outlet I honestly needed to survive.

One of my influences from a young age was Robert Williams, the American painter, and cartoonist. He is known for taking credit for the term Lowbrow Art in his famous magazine Juxtapoz. The painting, “Skulldy Dumpty,” really spoke to me, as did “Appetite for Destruction.” There were so many others who I looked up to, including Mark Ryden and Daniel Merriam. San Diego and LA were bursting with talented street artists sharing their eccentric pieces with the world. I began becoming increasingly engrossed in the culture and world of pop surrealism, which inspired many of my early tattoos and art pieces.

Suffice to say, pop surrealism is a passion of mine and always will be. I thrive on creating the perfect display of juxtaposition and dark humor on my client’s bodies. (In fact, the crazier the concept, the better.) So, if you’re looking for a giant marshmallow roasting a human or a kitty cat face with an octopus body, look no further. Our artistically minded creations will have something for all different senses of humor.